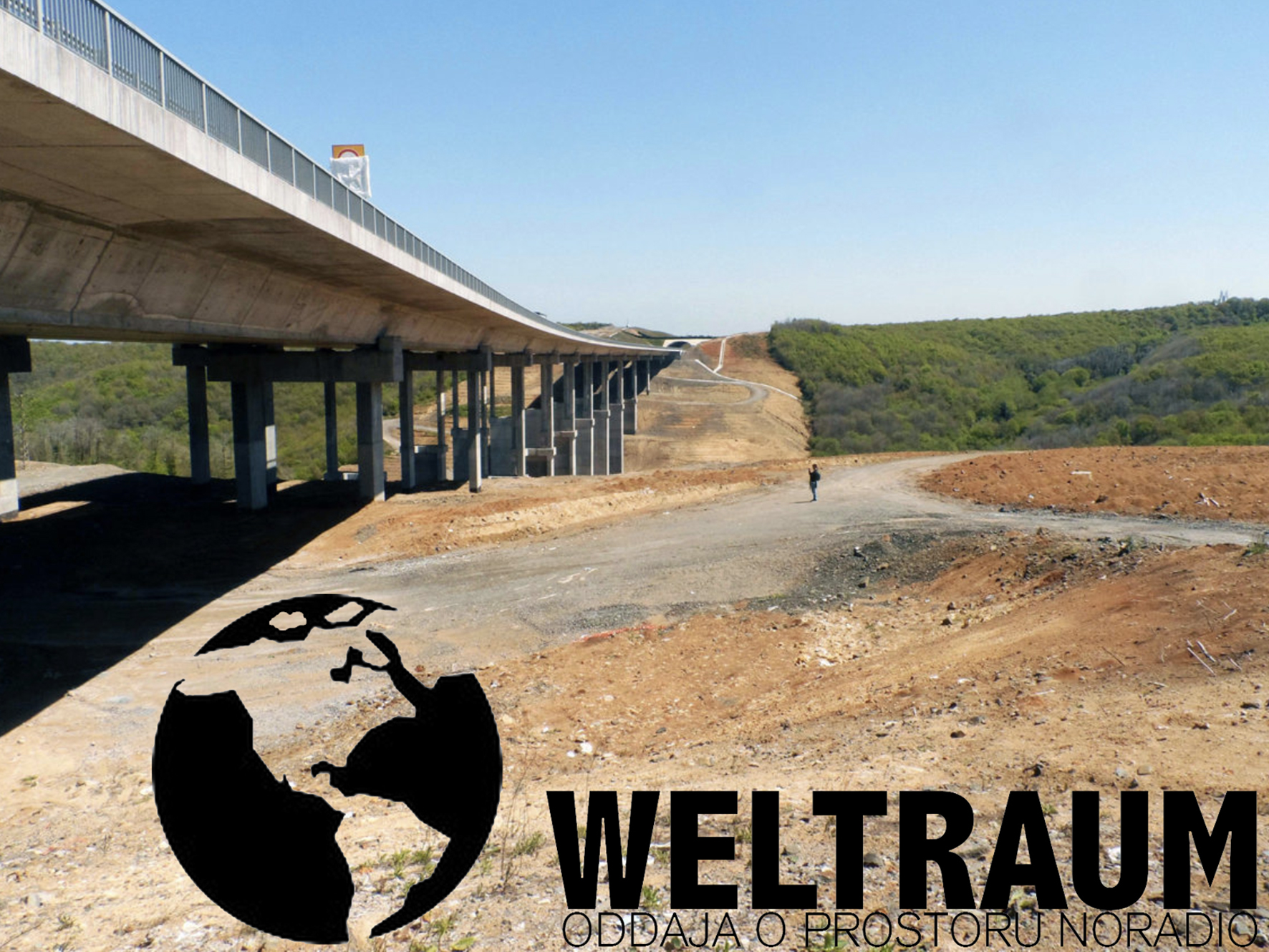 Independent Coastial Radio will broadcast Weltraum, a monthly show of active spatial design. In the first show Boštjan Bugarič will present an architect and researcher Nazlı Tümerdem. Her research project Istanbul Walkabouts is focusing on a critical walking on northern Istanbul.

Inspired by mobile ethnographic and artistic methodologies, she started her walks around the transforming landscapes of northern Istanbul in order to create awareness about ongoing neoliberal processes of urbanization taking place in the northern regions of Istanbul and their probable ecological consequences. I had the opportunity to join Nazlı in Berlin, where she organized a walk with Hülya Ertaş as a part of Critical Geography Research Workshop. This walk was more than just the observation of the territory, therefore I asked her to explain me more about Istanbul Walkabouts.

I would like to make a brief introduction to what is currently going on in Istanbul in terms of state-led constructions, so it would be clearer how Istanbul Walkabouts actually merged. During last decade there has been mega-scaled transformations taking place in Istanbul. These neoliberal processes of urbanization are directly focused on northern Istanbul. This geography is originally composed of forests, nature areas, water basins, farms, agriculture areas, ex-military zones, etc. On the other hand, the southern belt of Istanbul is urbanized, industrialized and quite populated, so it is already saturated and therefore it is rather difficult and very expensive to place mega projects.

Northern Istanbul is relatively far away from the city’s urban centres, they are out of mind because they are out of sight. For that reason, this region is taken as a tabula rasa area where anything can be built upon. My concern, as an architect who is working on Istanbul, was to go beyond the usual way of looking at the urbanized centre of cities from above through maps, satellites, images, drawings; and to visit these territories outside of the city’s densely developed centre to have a first-hand experience of the ongoing transformations.

You wanted to have a direct experience of what is going on at this territory?

Yes, this is how I started Istanbul Walkabouts. I started with short visits, expeditions. As I didn’t know these areas, it was kind of a revelation for me when I came face to face to this geography. My first visits to northern territories were mostly focused to the Northern Marmara Highway, which violates the city’s 2009 masterplan that cautioned us against building on the nature areas in northern Istanbul and kept them as protected zones. 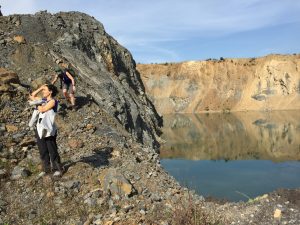 The highway is nonetheless passing through the northern forests and adversely affects the water reserves, flora and fauna, and thus the existing ecosystem. Moreover, it is a spine for all other mega projects that follows like the new Istanbul Airport and Canal Istanbul. It’s basically the materialized harbinger of a future ecological catastrophe for Istanbul and the greater territory around it.

Who builds this, who is the investor?

There are multiple international investors but all of these projects are state initiated. Therefore, it is directly related with the current political economy. It is a typical case where a mega-scaled infrastructural project is implemented via top-down approaches, with no regards to expert opinions, dwellers’ requests.

So, you stared to walk in these territories?

I started making short trips to these areas. Maybe walking for 2 or 3 hours at first. Then I started to make longer walks that lasted all day. And I also started to walk with other people as the information about the walks were spread with word of mouth. Since last June, I actually started making these walks public. Now, I announce them as events on Facebook so anyone can join, free of charge. This also means that people who are not directly interested in these transformations, or have an activist approach towards them, are also walking with us. The main idea is to connect two settlements that are located around the highway. During the walks, we also analyse and explore these areas. Most importantly, we keep a record of its current situation, which will be helpful when compared to how it will transform in the future. We are creating sort of an archive of these landscapes by walking through them.

You probably did a lot of kilometres? How many hours you spent on walks and how many people joined these walks?

I did more than thirty walks, which would be around 500 km. The duration of every walk changes but the average is around 5 hours. I have done walks where there was only one other walker with me but I’ve also done walks with hundreds of people, for example the walk I performed with 250 first-year students of architecture, landscape architecture, interior and urban design.

The walks have different characters, some of them are curated, which means that I repeat them and I know the paths by heart. Others are exploratory by nature, this is when we walk on an area that we haven’t walked before route and the group needs to create a new route collectively. I usually have a pre-designed route in my head but sometimes it’s quite hard to figure out the exact route from the map or satellite images. An area that seems walkable on the map might turn out to be utterly impossible to cross in situdue to ownership issues, vegetation, the highway that cuts through the area, a quarry, etc. Thus, the devised walk mostly changes on the site according to what we face during the actual walk. 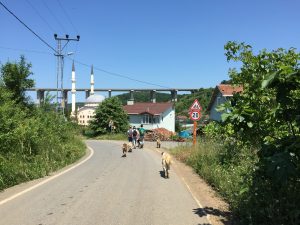 What does the walk mean to you? Does it slow down the perception of participants?

The highway is shortcutting the whole geography, it cuts through the landscape and skips geographic elements like valleys, hills, streams, villages, fields, forests, lakes, etc. It creates the fast perception of automobility. The idea of the walk is the opposite. It’s about not shortcutting the geography but walking it in a human speed and having a human perception and experiencing the landscape in a performative way. With a car, the experience of the area lasts less than an hour, but walking takes much more time. You really need to slow down and have a direct relationship with the landscape.

How do you document your walks?

I am still working on how to document and map the walks. The ways are evolving. I have been taking photographs and also videos. I usually walk with a GoPro attached to my body. After each walk, I create a video out of it and post it on YouTube. I also work on collages, dioramas, which have the purpose of explaining the story of one walk in one image. I also collect things while walking. Within different encounters during the walks it’s possible to document the impacts of the highway on the area and what happens when human and nonhuman inhabitants come face to face with a mega-scaled infrastructure project plunked down from above. I try to spread my work on social media in order to get more people involved as well.

What happens within participants during the walk?

I think this is really an important part of Istanbul Walkabouts. First of all, the walks last for a whole day. Together with the commutes which can last up to 2 to 3 hours one way, a group of people spend 8 to 10 hours together. Eventually, walking for hours in a landscape creates an intimate relation. Sometimes a walk becomes an adventure, because it is not necessarily an easy one. As there are no designed paths, we sometimes have to create our own. We collectively have to decide upon the route where we can walk, sometimes we separate into smaller groups and try to figure out where it is better to continue.

Therefore, I refer to these walks as “expeditions to the near” where we collectively explore the unknown areas in the hinterlands of the city. And at the end of each walk, there is always a feeling of accomplishment. Usually the walk initiates conversations between people, which was my main idea in the first place, to create a platform where people come together and start a critical discussion. When I am walking with friends, we usually share the same opinion about neoliberal processes on the territory and we mostly have an activist or resistant approach. Since I started making these walks public, people which I wouldn’t normally meet in daily life also started attending. They can be retired citizens, primary school teachers, engineers, etc. which don’t usually share the same perspective. Therefore, these encounters create something productive because we can open new discussions or exchange our opinions. Sometimes unplanned things happen, like meeting locals during the walk. Like a shepherd, a beekeeper or a person living in one of the villages. They are as well participants of the walk, because by interacting with them we can find out how their life changed by the construction of the highway.

You can learn a lot from these encounters. What about the experts, who did the city masterplan, did they join for a walk?

I invited some people from local municipalities but so far no one joined.

You created an ongoing network; how is it to lead such a group of people?

This usually depends on the crowd and also on the number of participants. A group around a dozen of people can work really well as you can get to know everyone during the walk. In a group of 30, people tend to create smaller groups, which do not interact so much. It also depends who comes to the walk and what they expect from it. 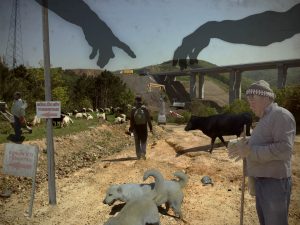 Recently you had a walk in Berlin. What is the future idea of your walkabouts?

I try to explore diverse landscapes through critical walking, like doing 10- or 20-km long walks in order to better understand the ongoing transformations, existing relations and processes of urbanization in different cities. In Istanbul, I perform these walks by walking in nonurban areas of the city that are going through neoliberal processes of urbanization. Of course, today, considering that the whole planet and even its atmosphere is going through some sort of urbanization, it is rather questionable on how you define what is urban and what is not.

The walk in Berlin was a part of the Critical Geography Research Workshop, so we had a limited amount of time. Therefore, the walk was not focused on the nonurban, but rather on walking as a methodology. The idea was to get out of the classroom and interact with people through walking. The act of walking and talking, discussing through walking.Now, I intend to deepen the use of walking as mobile methodology in my postdoctoral research where I will try to find out how to walk critically in other cities. 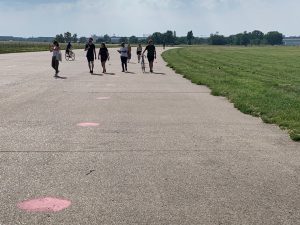 Nazlı Tümerdem is an architect/researcher from Istanbul. She received her B.Arch degree (2008) from Istanbul Technical University and M.Arch degree (2011) from Istanbul Bilgi University. She worked as an architect in various architectural offices and as a lecturer at several universities. In 2016, she was part of the team of Turkish Pavilion for the 15th Architecture Biennial of Venice. She completed her Ph.D. entitled ‘Istanbul Walkabouts: A Critical Walking Study of Northern Istanbul’ (2018) at Istanbul Technical University and continues performing walks around northern Istanbul as a part of her walking research project Istanbul Walkabouts. On September 2019, she will start her postdoctoral research at ETH Zurich D-ARCH Chair of Architecture and Territorial Planning.