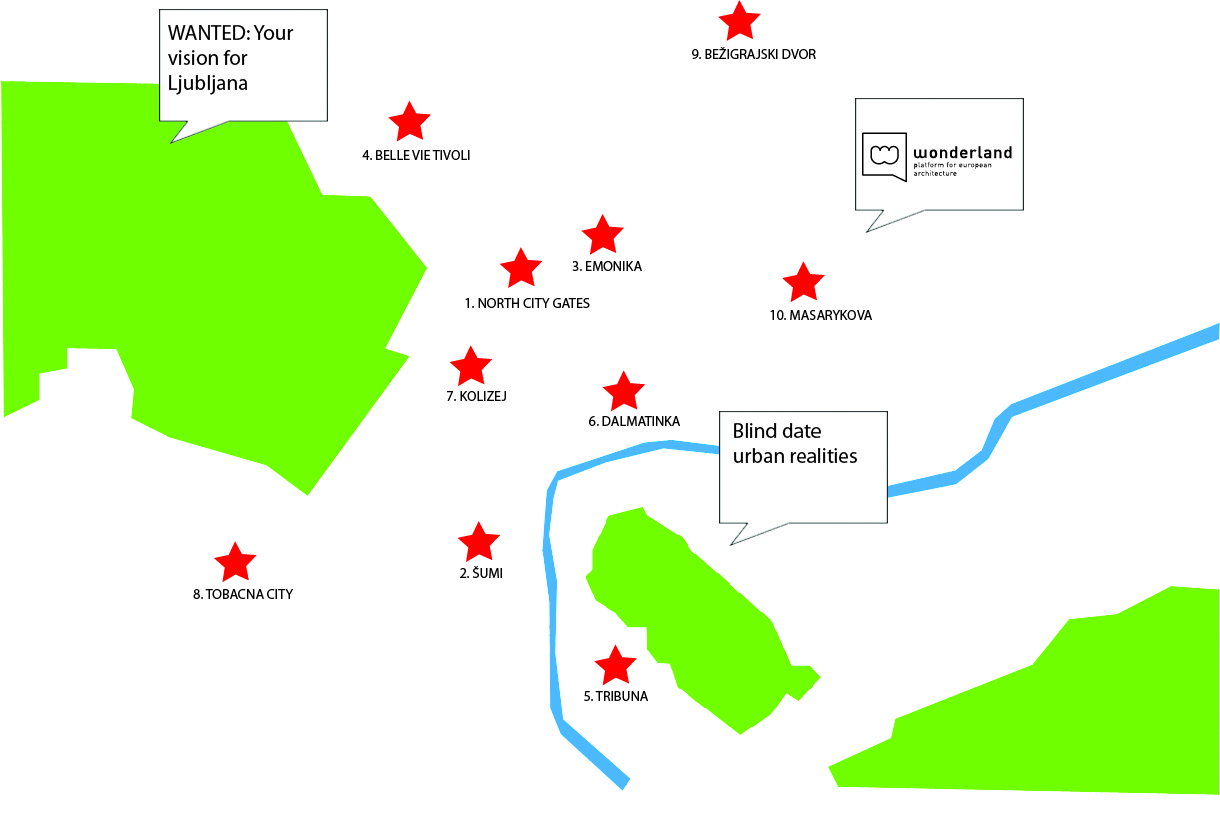 Wonderland in collaboration with KUD C3 and Museum of Architecture and Design (Ljubljana).

An interactive Blind Date of European architects, planners and experts in urban development took place on September 24th 2015 in Ljubljana within the organization of Wonderland, KUD C3 and the Museum of Architecture and Design. Under the title “Urban Realities” a collaboration of three selected teams together with local experts worked on the problematic topic of abandoned construction pits in Ljubljana.

The mayor Zoran Janković is still convinced that Ljubljana is the most beautiful city in the world. “Slovenia is not a friendly country in terms of foreign investment and the attitude towards those who gather the courage and even their own money to build something new, it’s quite shocking.” said Csaba Toth, director of the project company Emonika, new passenger-shopping centre with a 100-foot tower, which should be constructed out of the hole at the railway station and is now an empty construction pits. According to Toth municipal contribution and compensation for building land are extremely high – among the highest in Europe, as well as labour costs and bureaucracy, which is very complicated.

What could happen with devastated construction pits in the future was the topic of the Blind Date. 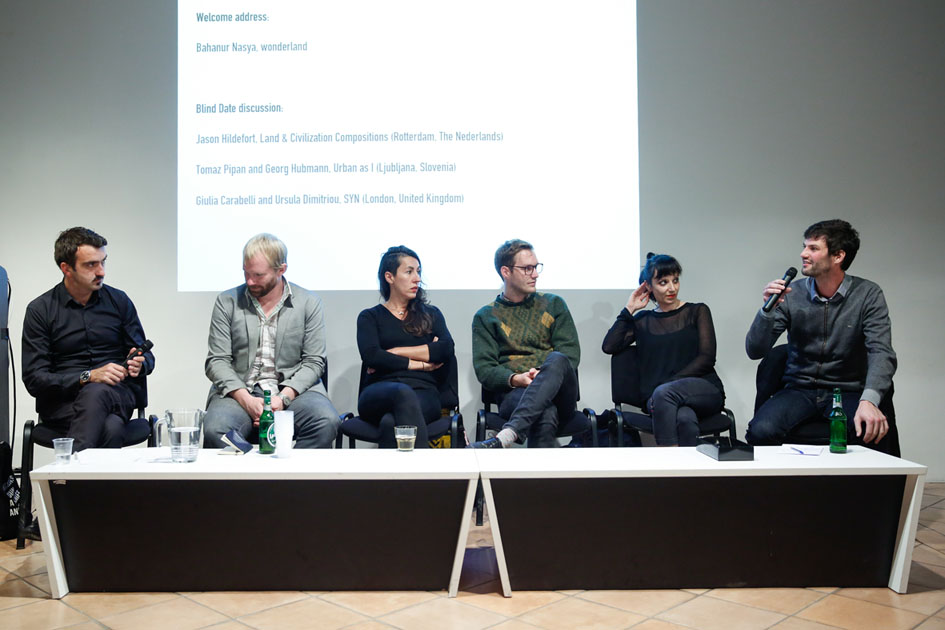 The selected groups took a tour on Ljubljana’s abandoned construction pits on the Blind date day. The tour started with a presentation of local experts of KUD Obrat (Polonca Lovšin and Urša Jurman). The first visited location was on Masarykova, just behind the corner where KUD Obrat already for 5 years develop a community – based garden intervention in a degraded urban space.

The intensive Blind Date event concluded with a public discussion in MAO.

The Visions for voids

One of the interesting outputs of the Blind Date discussion in MAO was to prepare a non-architectural competitions and in this way develop suitable contents for these hidden and abandoned spaces. The solutions, which Ljubljana Municipality proposes for these sites today, are temporary parking spaces or commercial advertising with jumbo posters. These solutions don’t solve the problem of abandoned and neglected construction pits.

The contribution of the international young experts at the Blind date event, were mainly to propose their own experiences and to include in the solution also:
• Functional reuse and connection of the sites to the city,
• Foster also the symbolic meaning of space (not only the profit a lot has) and inclusion of the community,
• Property solutions and legislative framework,
• Temporary use as a solution for reanimation of abandoned construction pits,
• Sustainability as a general principle.
The lively Blind Date discussion can be seen here.

The first step is to connect the city of Ljubljana and organizations that already works on the topic. The Blind Date was ignored by city representatives. Does this mean that the topic is not important at all or that being quiet about it doesn’t brings out the reality, which was made within wrong urban development? Some of the public Private Partnership in Slovenia are currently hidden behind the fences of abandoned construction pits.

The video of Tomaž Pipan and Georg Hubmann presents the problematic topic of abandoned construction pits in Ljubljana on the site of Tobačna:

Urban as I /©Tomaz Pipan and Georg Hubmann, Urban as I (Ljubljana, Slovenia), Developed from the brief of architectural workshop Future Cities 2014 (www.futurecities.si) and based on PhD thesis by Tomaz Pipan: “Capacity of Industry for a Civic Culture”, London Metropolitan University, June 2014 (www.urban.si)

The video of ALLCOLOURS and Beluga & Töchter gives insight to tactics for temporary use:

Giulia Carabelli and Ursula Dimitriou present a reflection of voids in the city tissue:

All videos of the Blind date finalists can be seen here:

1. North City Gates: The Hole at Tivoli Park
The construction of North City Gates, where the company S1 wanted to build a 70-meter tower, collapsed because nobody paid security for the starting price of 3.9 million euros excluding VAT. The company is seeking extension of a building permit, which will soon expire. 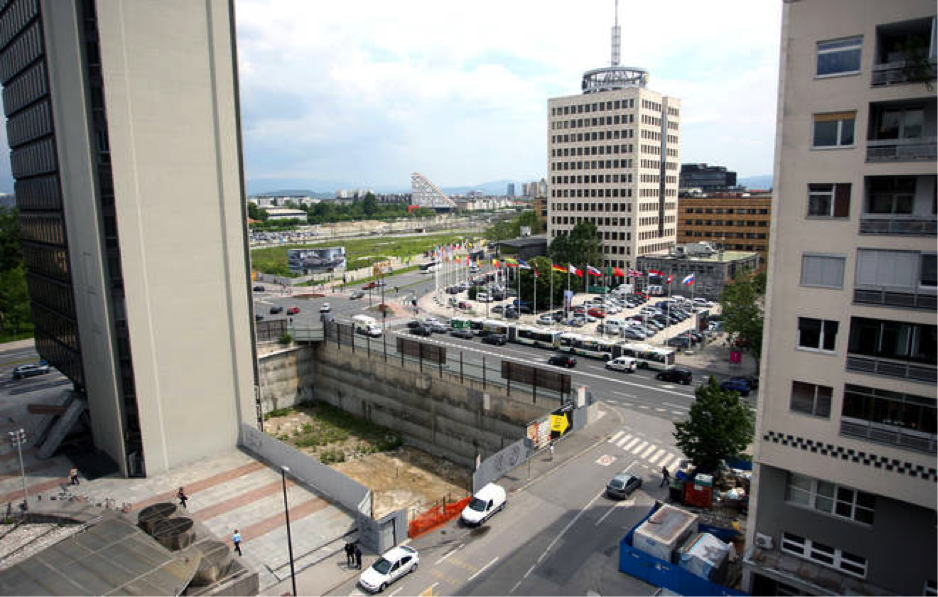 2. Šumi: Temporary Parking
The project company Šumijev kvart owned by KD Group Matjaz Gantar, deny that around 50 million-project stands. In 2013 they announced that there “are conducted intensive activities for the completion of the project. There are discussions going on with the potential business partnership with well-known foreign investors. In the meantime the project is adapting to new realities in Ljubljana.” The project has been changed several times; the first building permit was issued in December 2008. This year is 19 years since Boris Podrecca won the competition for this project. 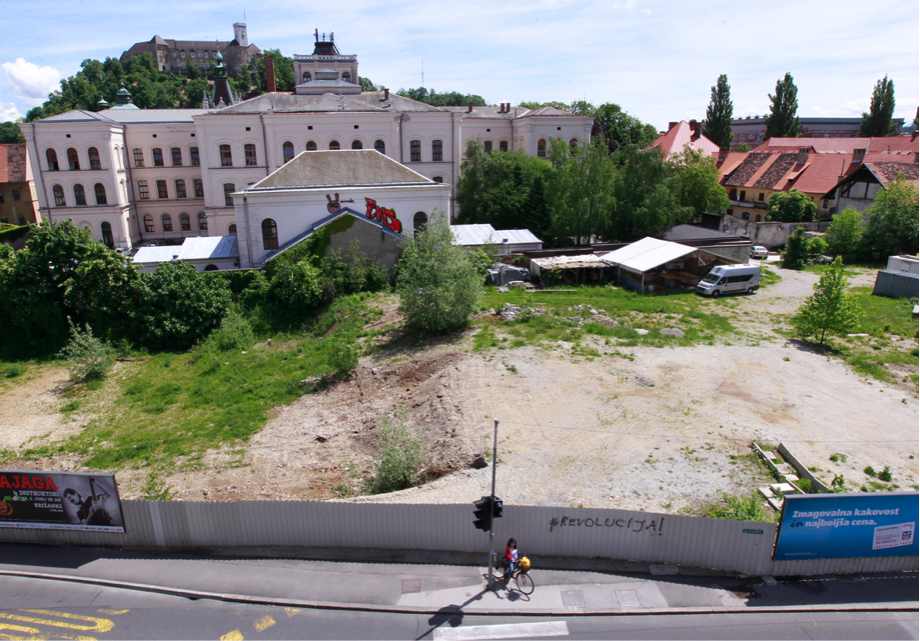 3. Emonika: Ambitious on Paper Already for Eleven Years
“Although still nothing visible on the project site, is Emonika on track,” provides Csaba Toth. The Canadian-Hungarian investment company TriGranit owns the project. According to Toth remains the construction was expected to begin in late 2013, the opening of the shopping and entertainment center, railway and bus stations and parking capacity by the end of 2015. The project is worth around 320 million euros and negotiations for its construction was ran with Ministry of Ex Economic Ministry (now Ministry of Economic Development and Technology), Slovenian Railways and Municipality of Ljubljana. 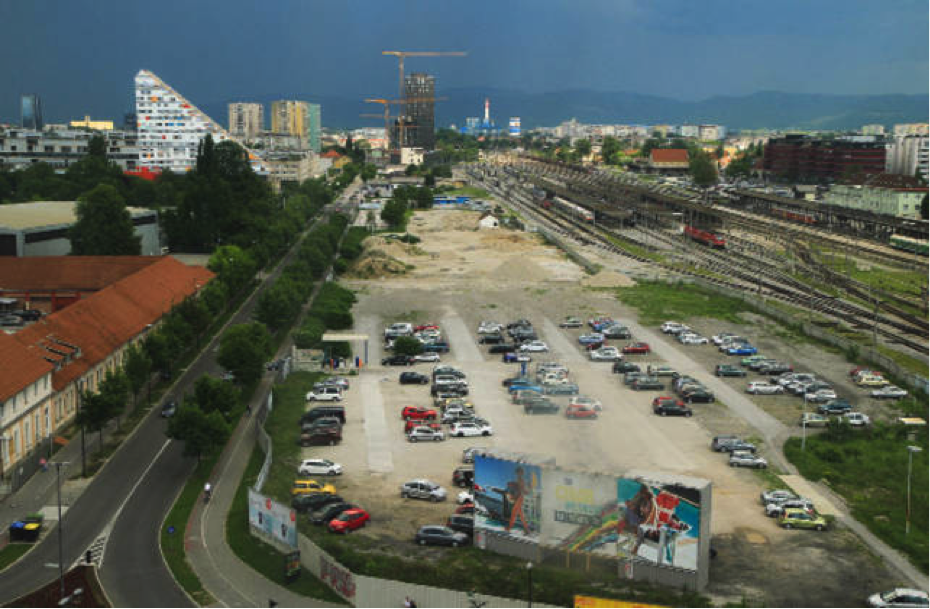 4. Belle Vie Tivoli: Water Instead of Housing
Enegroplan company got stuck after excavation of the one of the more problematic construction pit. Abanka could not find a common language with Energoplan regard to the financing of 50-million project. Meanwhile a search for over ten investors to the project by each of about a million euros in so-called condominium project or joint ownership is still going on. The financial crisis and subsequent compulsory settlement Energoplan was no longer able to continue the project and today the construction pit is full of stagnant water. 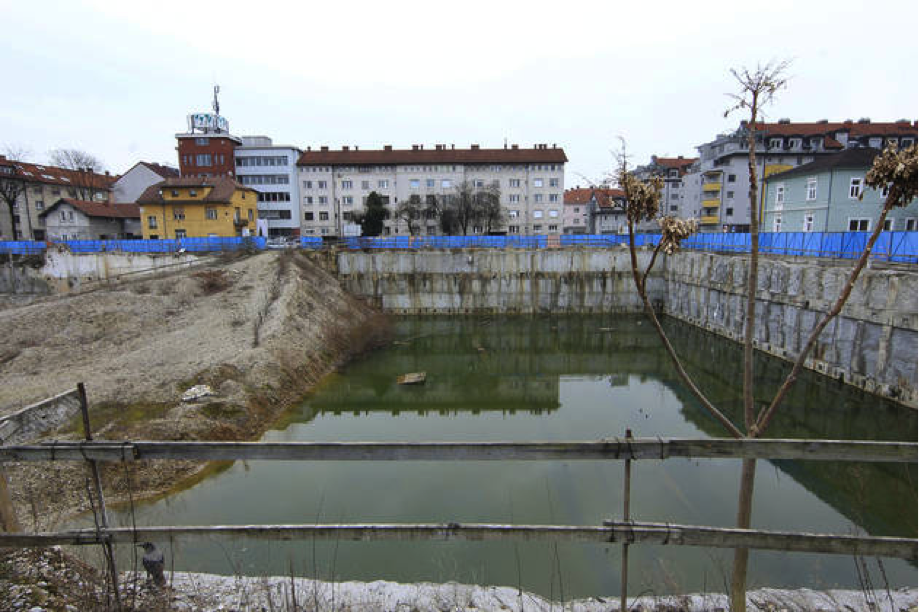 5. Tribuna: Leftover After Collapse
Following the bankruptcy of Kraški zidar is the unfinished construction of residential complex Tribuna in Prule. Project is worth about 20 million euro. 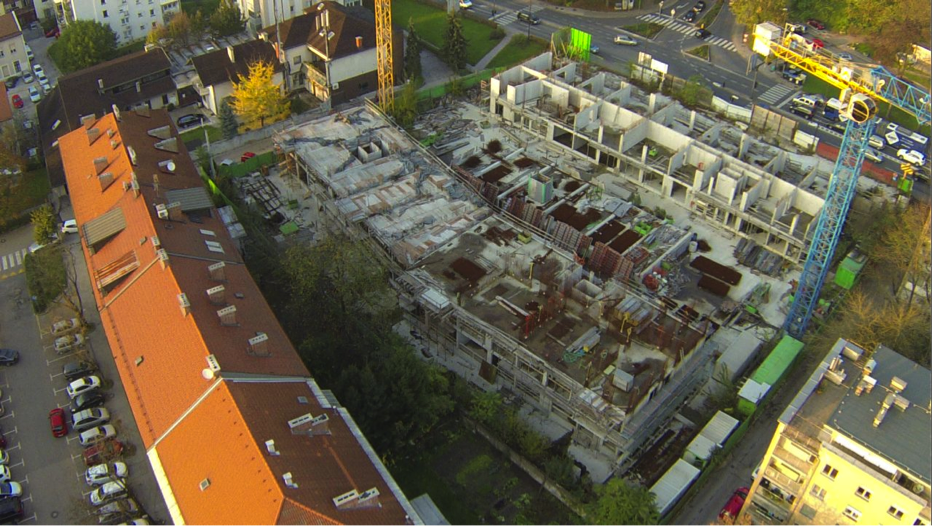 6. Dalmatinka: Printing Ghost
In the center of Ljubljana there is a deserted building complex called Dalmatinka. It should be eight floors building on the site of the former printing Kleinmayer & Bamberg building. Due to the injection of the concrete foundation the neighbour building started to crack. Based on the municipal spatial plan is allowed to dig three floors underground garage, so the protection of the excavation is very difficult. 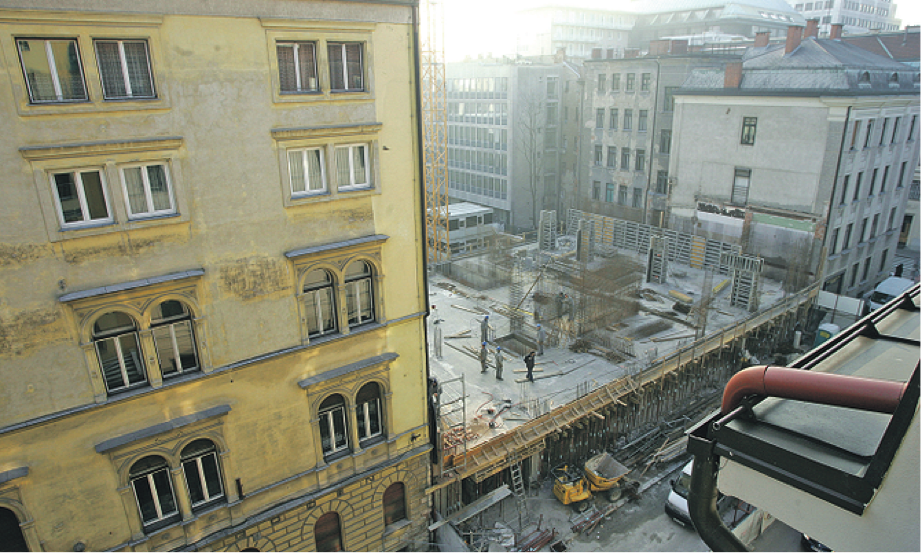 7. Kolizej: Just a History
Kolizej was demolished in 2010. Kranjska investicijska družba (KID) wanted to build a 70-meter building with a concert hall, a hotel and offices. The project collapsed because of the special conservation commission decision, which did not allow the construction of building higher than 30. What are the new plans? “Unfortunately I do not have any concrete plans” explained Jože Anderlič from KID. 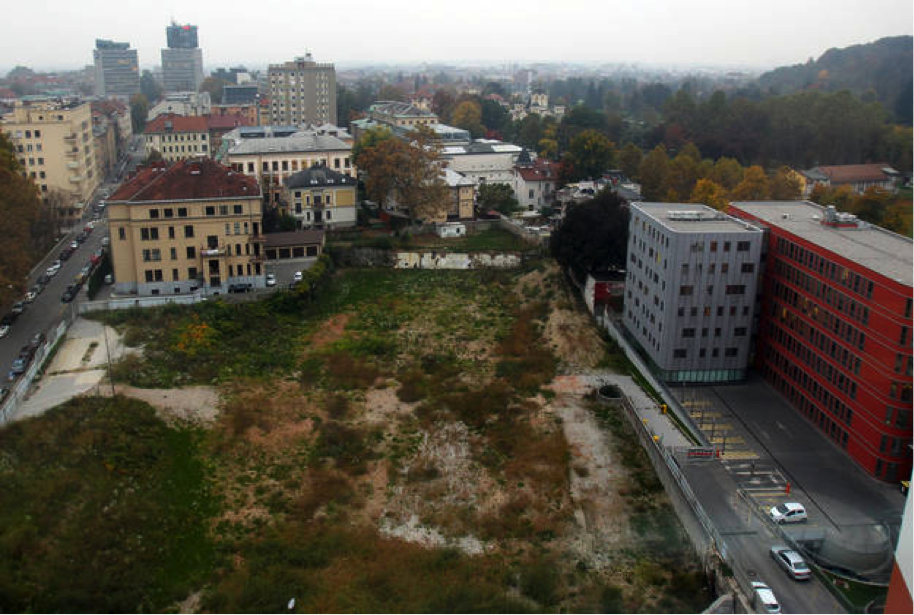 8. Tobačna City: No Investor – No Future
Company Imos plans to build ten towers on the former tobacco factory with the total value of 300 million euros. After the excavation of the construction pit a project is practically standing. The entire project is expected to be too risky to be fully financed with debt. Banks do not give money to continue the project to Imos, which also failed to convince foreigners (the most serious were Azerbaijanis) to donate tens of millions of euros. 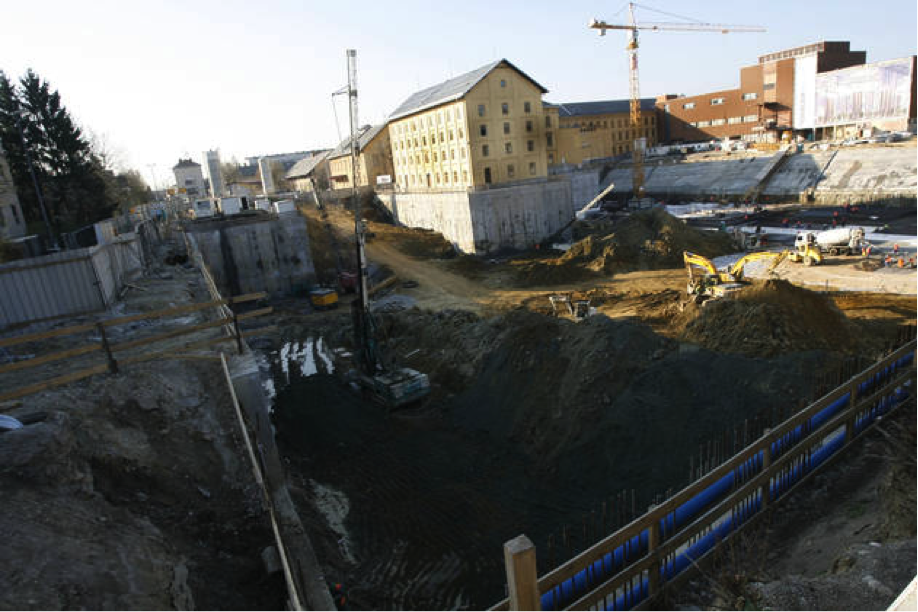 9. Bežigrajski Dvor: No Man’s Land
Bežigrad construction pit is fenced and overgrown with weeds and bushes, but was never issued a building permit for a new building. In 2005, the government and Imos, the then co-owner of the land, filed a request for it, but they later withdrew and since then the matter stands. 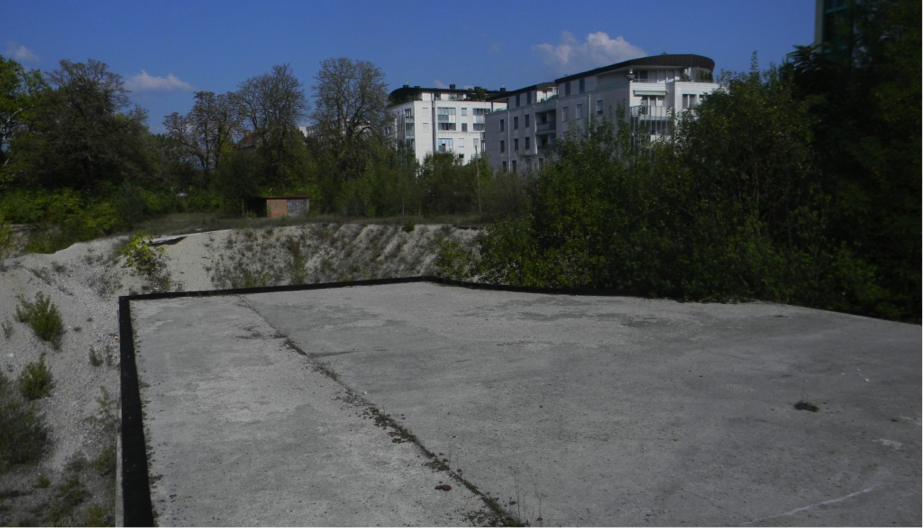 10. Masarykova: Overgown Pit
For several years is this construction pit overgrown with vegetation. In this area Energoplan planned construction of commercial and residential center F3. To the realization did not occur as Energoplan did not acquired all the land; a quarter of them are owned by Energoplan, three quarters owned by the City of Ljubljana. The part, which is owned by the city, surrounding residents get permission for temporary gardens. 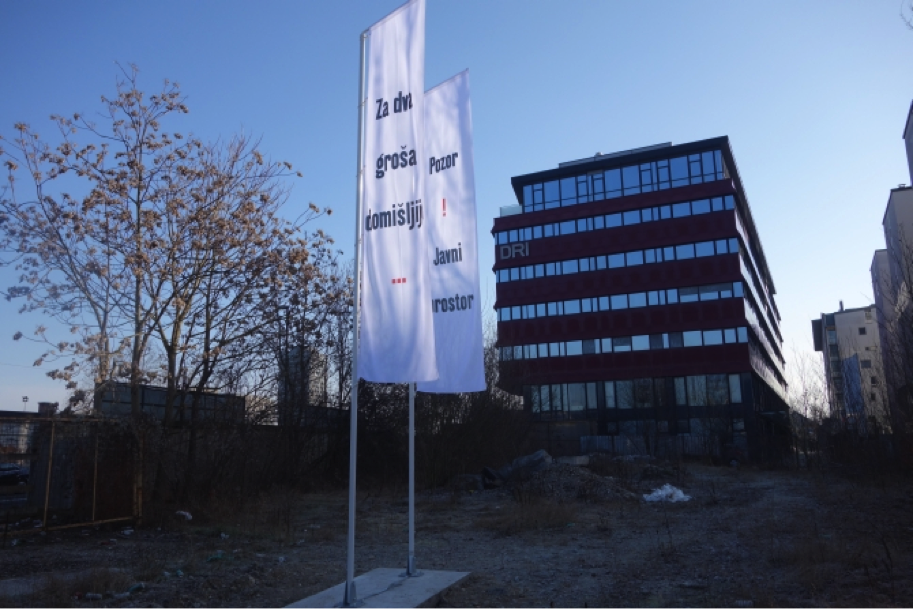 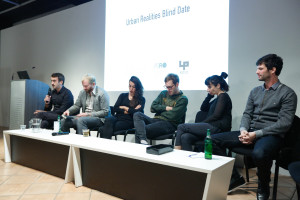 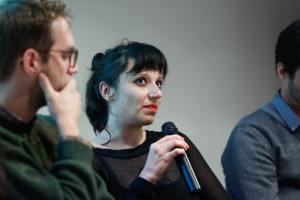 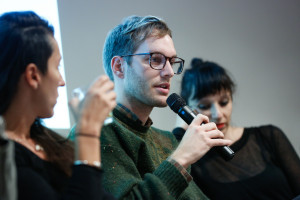 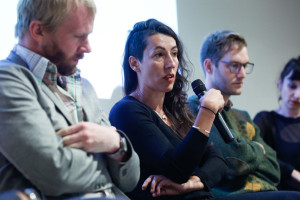 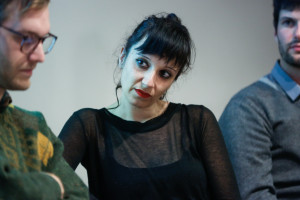 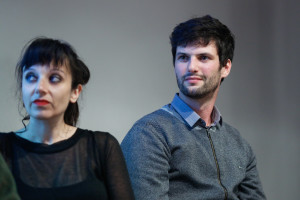 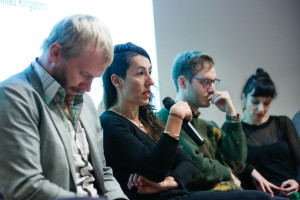 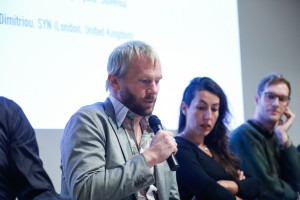